Home UN Updates ‘You are not alone, we are in this together’, declare UN staffers in Lebanon
UN Updates

‘You are not alone, we are in this together’, declare UN staffers in Lebanon

Wearing hats, masks and gloves, and carrying shovels, buckets and burlap bags, UN staff members from the various agencies across the country, began to put the staff unions’ #UN4Beirut initiative into action, to clean up glass, debris and rubble from the bomb-stricken streets and help vulnerable residents clear their damaged houses.

Most staffers were joined by family members and friends. Even some young children took part. Devastated by the tragic explosion that ripped through Beirut Port on 4 August, reportedly killing more than 200 and wounding 6,000, hundreds of thousands were also rendered homeless.

Mindful of the city-wide turmoil, staff members checked in on each other, recounting stories of how they miraculously survived the explosion and how some of them lost their homes, resigned for now, to living in hotels.

Staff members divided themselves into groups and took to the streets covering three major areas within Beirut, that were badly destroyed by the blast.

“It is heartbreaking to see the amount and magnitude of destruction in this city of exceptional beauty”, said Deputy Special Coordinator and Resident and Humaniarian Coordinator for Lebanon, Najat Rochdi, who had just arrived in Beirut to take office, only a few days before tragedy struck.

“Undoubtedly, the trauma caused by this catastrophe will not only be felt by those who heard and were injured by this horrific explosion, but also by all Lebanese who witnessed this massive destruction. The impact of this tragedy has also shaken the whole world that came together to support Lebanon,”

Here ‘to stay, and deliver’ for the people

“I am putting my heart, my energy my time in, and I am not going to give up on anything to help the Lebanese people. We are here to stay and to deliver. We are here to support and assist, and we will overcome this tragedy altogether”, Ms. Rochdi added, while joining the teams working hard to help clear the streets.

She is convinced that the solidarity and perseverance of the Lebanese – demonstrated throughout the years – will help them recover and emerge stronger.

Wearing a mask and holding his shovel, Mohamad Saleh, Programme Officer at UNICEF, was determined to offer assistance on the ground. He stood in awe at the scene of destruction all around, and struggled to describe how he felt. “We are all in this together, no matter where we live in this country.”

Lebanon, a founding member of the UN in 1945, is one of the smallest recognized sovereign states in Asia, at just 10,452 square kilometers. 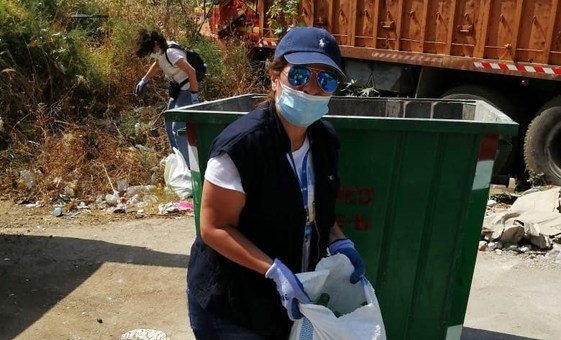 “The capital is ours and we should stand by our people amidst this humanitarian crisis. One small shovel can bring a change and can help people recover at a very fast pace”, he added.

Leading this initiative was Mona Fattah, Chairperson of the UN Economic and Social Commission for Western Asia (ESCWA) Staff Council, a Sustainable Development Officer at the Commission.

“The ESCWA Staff Council mobilized the #UN4Beirut campaign in coordination with all staff unions in Lebanon. This is one campaign of many initiatives that will follow, beginning wih the cleaning of debris, to the fundraising campaign that is taking place in other duty stations by staff unions in solidarity with Beirut and its people”, he said.

Staffer Gorges Abi Sleiman, an Urban Planning Assistant with UN-Habitat, who has been working tirelessly in the aftermath of the blast supporting a coordinated recovery and response, said: “It’s heartbreaking to see the majority of Greater Beirut residents hungry and homeless, especially after already struggling from the crippling socio-economic crisis and rising COVID-19 cases.

We are witnessing a huge catastrophe and I am literally devastated by the chaos and destruction that hit the neighborhoods of Beirut and adjacent areas. I hope we will be able to recover.”

The explosion hammered a nation already staggering from economic meltdown and a surge in coronavirus cases. Much of the population had already been living in survival mode. Since October 2019, anti-government protesters have been rallying and calling for a political overhaul as socio-economic and financial crises worsened in the country.

UNIC Beirut Director, Margo Helou, praised the acts of solidarity and kindness demonstrated by the UN staff in Lebanon in support of the families of victims and the Lebanese people.

She hailed the UN staff unions’ initiative as a great show of empathy and solidarity that is gravely needed in these challenging times and commended the overwhelming participation of youth in this intiative. “I cannot express my pride and joy seeing all UN staff, and my staff from UNIC Beirut, standing shoulder to shoulder to assist in relief work, and demonstrating such a humane spirit”, Ms. Helou said.

Once he felt the shockwaves of the explosion all the way from his hometown in South Lebanon, Mohamad Nassif, a Lebanese architect, immediately knew that people in the city would need help: “I learned from a neighbor that the UN was leading a cleaning operation and I felt encouraged to participate.

Later, two of my friends found out from social media that I was helping and they got motived too, because we feel safe with this organization.”

Malek Wahidi, a 19 year-old student who was with a relative that works at the UN, said in his view, “the youth are the only hope for Lebanon.”

He urged all his friends to join him on the ground, “because Beirut is bleeding and it needs everyone’s support.”

“I’ve seen people, young, old, homeless, broken and shocked, coming together to clean their streets, look for their loved ones, offering each other shelter and support”, said Laeticia Mitri, a new graduate volunteering in the street clearing operation.

Choking while talking, as tears ran down her cheeks, said that she was helping despite the fact that she’s now unemployed, and with the country facing an uncertain future. “Do you really think there’s still any hope left?”

Beirut has long been compared to a phoenix that always rises from the ashes. Throughout history, the city has been destroyed and rebuilt seven times. While still mourning the dead and the missing, Lebanese citizens are determined to rebuild their shattered homes and businesses with the hope of bringing their Beirut, back to life.

For them, it is time to rebuild better, and return stronger than before.

‘Stand up against hate’ towards LGBTI people, UN...